More From This Chef »

This information is per serving.

Sicilain cuisine has many influences including Greek, Arab, and African. Sicily was a melting pot of the ancient world.

Sicilian Style Eggplant Pizza reflects those influences. You won’t find this pizza on the menu at American pizzerias. Americans love meat. The top selling pizza is pepperoni not eggplant.

This crust Sicilian Style Eggplant Pizza has only 215 calories, 3 grams of saturated fat, 240 mg of sodium and 7 grams of carbohydrates per serving (1/8th of a 12 or 14 inch pizza). You also get nutrient rich tomato sauce. 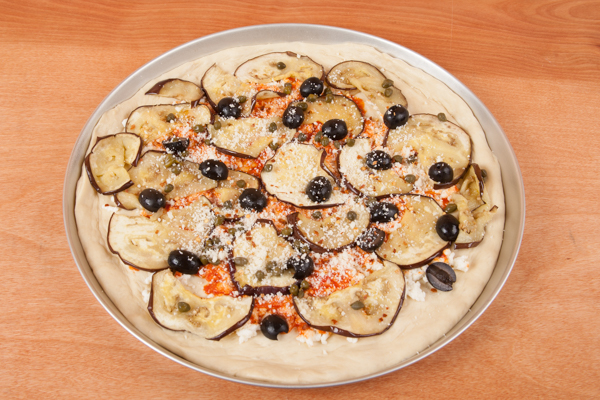 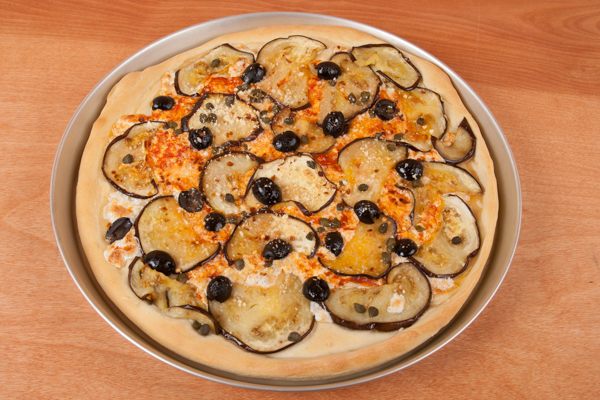 While Sicilian Style Eggplant Pizza doesn’t provide the same level of protein available from meat pizzas, it provides a fraction of the sodium and saturated fat.

Reduce prep time by using prepared pizza dough (available from most stores). Prepared doughs are higher in sodium, but overall sodium continent is less than most restaurant and frozen pizzas.

Place oven racks in the middle and lower part of your oven. Preheat oven to 400°F (205°C). Arrange eggplant of one or more baking sheets. Brush with olive oil. Turn and brush opposite side. Bake 10 to 15 minutes, turning once, or until tender and slightly browned. Drain eggplant on paper towels if desired.

Lightly coat two 12" or 14" pizza pans with cooking spray. Increase oven temperature to 425°F (220°C). Divide homemade pizza dough in half and roll out or stretch to fit pans.

Divide tomato sauce between the pizzas and spread evenly across the dough. Distribute mozzarella over each crust. Arrange eggplant slices and distribute the olives and capers over each pizza. Sprinkle with Romano cheese. Season to taste with salt, pepper, and red pepper flakes.

Bake each pizza on the lower rack 15 to 25 minutes, depending on thickness, or until the crust is golden and browned on the bottom. Cool 5 minutes and serve.