The Less Than 700 Calorie Breakfast

Wouldn’t dieting be fun and enjoyable if you could eat more food with less calories than fats foods and processed foods? A filling breakfast with 700 calories or less?

The truth is you can. Most people were not overweight or obese before fast, convenient foods became readily available throughout the country. Compare photos takes taken in the 1950s and 60s versus the past decade.

Back then the frozen food section had primarily frozen vegetables and ice  cream. The hundreds of processed meals didn’t exist. Yes, there were frozen TV dinners. The dawning of the convenience food industry and road to obesity.

How do you make food fast? It involves a lot of preparation and the ability to cook and serve the item within a few minutes of ordering it unless it’s cooked and sitting under a heat lamp.

A good example is the egg-muffin sandwich offered by many fast food restaurants. It’s simple, easy to eat and inexpensive. It consists of an English muffin (mostly white flour), a fried egg, cheese and bacon, Canadian bacon, or sausage. The example pictured with Canadian bacon is about:

Can you do better at home? 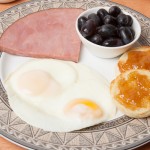 Here is a sample breakfast of two fried eggs, 4.5 ounces of ham, homemade English muffin with fig preserves, and 4 ounces of black grapes:

Over 80 percent of the sodium comes from the ham. If you reduce the amount of ham from 4.5 to 2 ouches you reduce sodium by over 600 mg.

In this example, for about the same number of calories as 2 egg-muffin sandwiches, you get 30 percent more food and 20 percent less saturated fat. Most of the saturated fat in the muffin sandwich comes from the cheese. You are also getting about 2 servings of fresh fruit which is often missing from fast food items but important for maintaining good health.

So, can you eat more food for less? The answer is yes. If you prefer a lighter breakfast; 1 egg, 2 ounces of ham, English muffin and fruit you’ll get more food and a single muffin sandwich for about 410 calories. That leaves you with almost 300 calories for your morning coffee, daily snacks or allocate them to lunch and dinner.

By cooking smart at home, you can eat more with fewer calories and maintain or loose weight.