American pizza restaurants have developed some unique ideas for pizzas that turn the humble Italian pie into a creation that would makes Italian’s roll their eyes and wonder if Americans had lost their marble in addition to their senses.

Pizza is one of the most ethnic popular foods in the United States, but has become one of the least healthy foods making do not eat lists for many reasons including:

Authentic Italian pizza is thin crust (New York Style), has fresh mozzarella cheese in moderation, thin layer of tomato sauce, and topped with minimal toppings like proscuitto and arugula. Yes, arugula or other greens instead of pepperoni an American invention.

100s of Varieties and Growing

California has lead the way in new and unusual pizza flavors. American pizza can be Bar-B-Que, Hawaiian, Mexican, Thai, and a host of other flavors.

A recent Papa John’s® ad for their latest creation simply had me shaking my head; a chili and Fritos® corn chip pizza. And if that wasn’t enough to make your stomach turn, you can add a Mega Chocolate chip cookie for only $5. 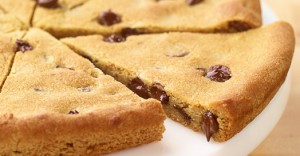 Papa John’s® slogan and trademark is Better Ingredients, Better Pizza. To think founder and CEO John Schnatter would consider a pizza topped with chili and Fritos® a better pizza is mind boggling.

Fritos® corn chips covered with chili is a popular comfort food in some parts off the United States and sold by sport venues where healthy foodsare alien at sporting events. Spectators want hot dogs, corn dogs, beer, potato chips, and other foods to maintain bellies hanging over their belts.

Being the official pizza sponsor of the National Football League, I can only assume a series of concussions lead to brain damage and the creation of this pizza.

May it be short lived.

If you want to know how much carbohydrate, saturated fat, and calories are in a chili Fritos® pizza, well it is their little secret.

But you won’t find chili Fritos® pizza only their speciality pizzas, sides, desserts, and extras.

How does it compare to a homemade Chocolate Chip Cookie? A 32 g (1 cookie) made with butter and nuts has:

But who can eat just one slice or cookie?

A meal of Fritos® pizza, chocolate chip cookies, and beer is one way to reduce your football watching days.