Tomatoes are an abundant crop in southern Italy. Ripe Roma (plum) tomatoes are pureed and made into tomato sauce or halved and placed out in the sun to dry. Flavor packed sun dried tomatoes is a common ingredient in Italian recipes ranging from antipasto to entrees. 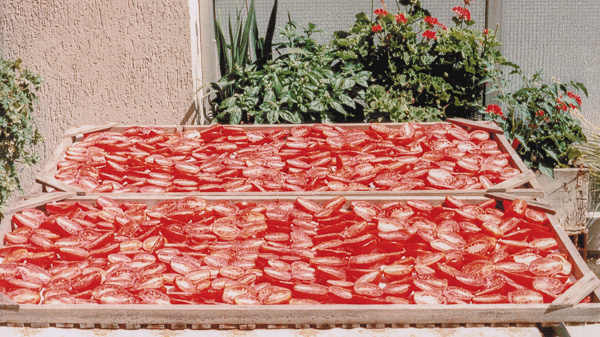 Drying tomatoes is one way to preserve fresh grown tomatoes until the next crop. And it enhances the flavor. Like other dried foods, most of their water content is lost following days of drying in the sun. Unlike dehydrated foods devoid of all water, sun dried tomatoes are chewy like raisins not crunchy.

Tomatoes are cut in half and placed sliced-side up in wicker baskets, screens or trays lined with cheesecloth. Salt may be added if desired. Other ingredients like rosemary, basil, dried paprika, and garlic can also be added. For Roma and cherry tomatoes, seeds are not removed. Removing seeds from other types of tomatoes is optional.

The sliced tomatoes are covered with cheesecloth and placed in direct sunlight. The drying process will from 4 to 14 days depending on the size of the tomatoes, outside temperature, humidity and length of time in the sun. The higher the temperature and lower the humidity the faster the tomatoes will dry. Tomatoes should be checked daily to prevent over drying and brought in at night to protect from moisture and insect infestation. 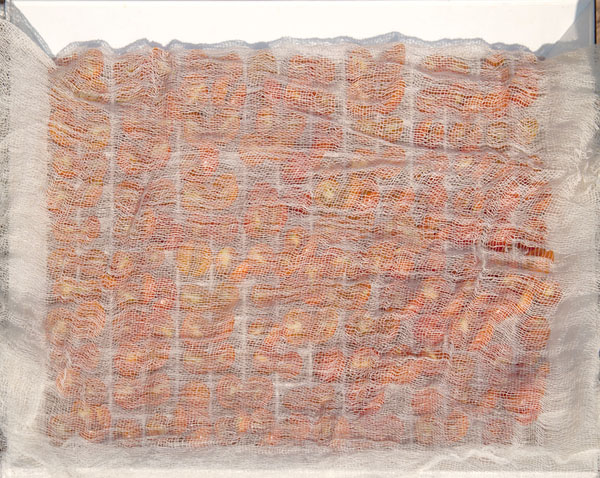 Dried tomatoes will loose about 90 percent of their moisture. One pound (450g) of tomatoes produces 2 to 3 ounces (50-80g) of dried tomatoes. 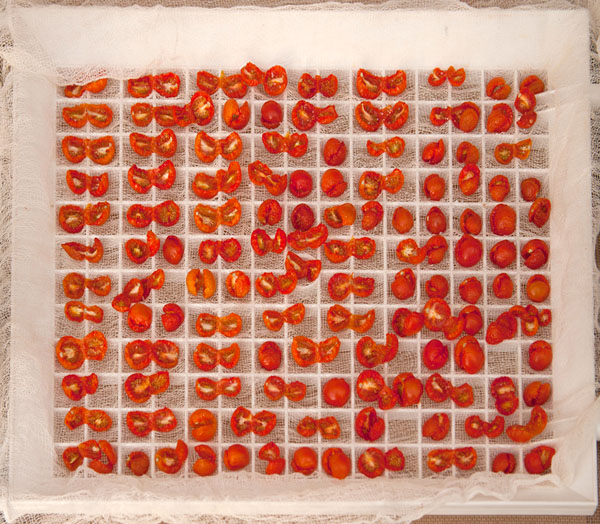 Tomatoes can also be dried in your oven. Cherry tomatoes can be placed on baking sheets or wire cooling racks. Place Roma and other tomatoes cut side up on wire racks for maximin heat circulation and faster drying. 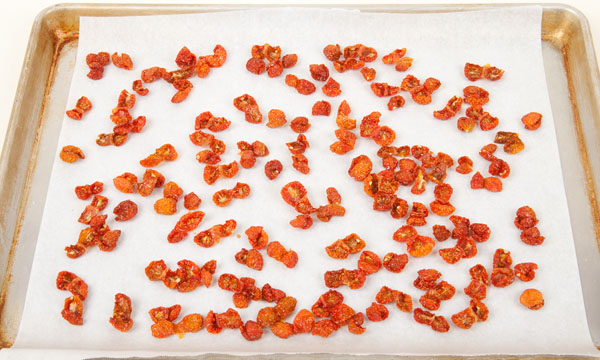 Preheat your oven to 150° to 200°F (65° to 93°C). Lower temperatures give you more control over the drying time. Higher temperatures reduce drying time but can also over dry the tomatoes. Once tomatoes are over dried, they can still be used but may require re-hydrating depending on the recipe.

Oven drying takes 10 to 20 hours depending on the tomato type and size. Periodically check cherry tomatoes after 5 hours and Roma tomatoes after 10 hours.

Drying concentrates and intensifies the flavor while retaining nutritional value. Tomatoes are high in lycopene, antioxidants, and vitamin C, and low in sodium, fat, and calories.

Dried tomatoes are usually stored in clean jars and refrigerated. Shelf life is indefinite when properly dried. Tomatoes can be stored vacuum packed without refrigeration. Commercial produced sun-dried tomatoes are stored in oil. This method adds lots of calories. Stored without oil, one sun-dried tomato has the same number of calories as a fresh tomato. Only water, which has no calories, is lost in the drying process.

If you can fruits and vegetables canned sun-dried tomatoes can be stored without refrigeration. Follow all canning procedures to prevent bacterial contamination.