American’s who do not how how to cook are dependent on large multinational corporations and weight loss programs producing mini meals they believe will help them shed pounds. In a way they do. They shed pounds from your wallet. Not British pounds, but good old American dollars. The money flows out and the weigh remains.

Not only do these companies continue to market these mini entrees when experts know eating less does not result in long term weight  loss and weight maintenance, but they are turning out mass-produced, industrial, preservative ladened food you wouldn’t serve to your pet. Assuming you love your pets.

And supermarket frozen foods sections are packed with these times. Why? For the most part they are cheap. At least people are led to believe they are fast and cheap.

Want a pizza with artificial cheese and pepperoni product for less than $2? They’ve got it! And occasionally it sells for $1! What a bargain!

Here is one example comparing a cheap frozen pizza versus real food: 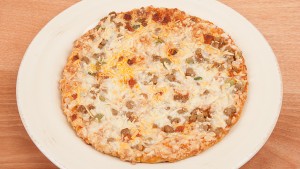 Doesn’t it look delicious? The crust is horrible, the cheese is artificial and didn’t melt when baked, and the vegetables are nonexistent. This pizza doesn’t even come close to the picture on the box which looks like delicious restaurant pizza. But more about that in a future post about frozen versus take and bake pizza.

This pizza is 8 inches in diameter and serves 2. That’s a pretty small party. Wanna bet most people will eat the whole thing? What do you get for your money if you eat the whole pizza:

Bu comparison, here is a recent, simple, grilled fish dinner I made for my upcoming 700 Calorie Meals book: 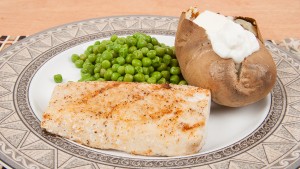 The potato, which weighed more than pizza, was grilled one hour at 500°F, the frozen peas took less than 10 minutes to cook and are coated with butter, and the 8 oz. mahi-mahi fillet was grilled about 3 minutes per side. The potato has 1 tablespoon of butter and 2 tablespoon of greek yogurt. The outcome:

More than twice as much food for about the same number of calories, two and a half times as much protein, and over 40 percent less sodium.

Total meal cost as of July 2014; about $4.50. Yes, it is about 3 times more than the pizza, but if you go by portion size it is closer to $2.25 per serving for the grilled fish meal. Many petite frozen entrees cost more than that for a 6 to 10 oz. serving! Do you still believe you are saving money?

You won’t find an 8 oz. maui-mahi lunch or dinner for $4.50 on any restaurant menu. A fast food fried fish meal with two sides costs more and you get significantly less except for calories, and sodium.

I don’t diet because I don’t eat the garbage that has flooded the American food market. I’m not hungry, because I eat more food for the same or fewer calories than so called diet or portion control meals. I’ve never given up the foods I love to maintain my weight.

Healthy eating starts at home in your kitchen. Corporations cater to investors by providing what consumers believe is good for them.

It is time to bury the you have to eat less to lose weight myth.