One reason I’ve never paid any attention to National Spumoni Day is due to the difficulty of finding Apulian style spumoni. Most Americans are use to Neapolitan style spumoni, usually a combination of chocolate, strawberry and pistachio ice cream. It’s similar to Neapolitan ice cream except pistachio is replaced with vanilla. You get three flavors of ice cream and a lot of food coloring.

Most Americans have never tasted Apulian style spumoni with layers of chocolate, coffee, and a liquor saturated nut middle or third flavor of ice cream which technically is gelato not American style ice cream. So, for all intents and purposes, most spumoni sold in the United States doesn’t even come close to its Italian counterpart. Surprise! Nothing really new with that. American versions of most foods or beverages rarely equal its counterpart. 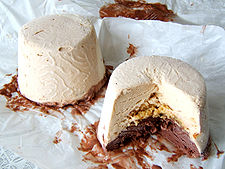 Given a choice between red and green artificial colored spumoni and Apulian spumoni, also know as spumoni salentini, which would you choose? For me, there is no choice. The harder to find Apulian spumoni is more flavorful than its more popular Neapolitan cousin. Of course I am biased since Apulian spumoni, store bought and hand made by my cousin, is what I grew up with. The photo below is spumoni served by one of my cousins following dinner. 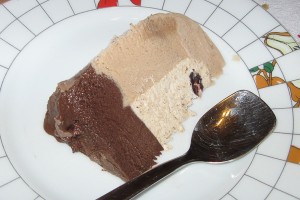 Decades ago, decent spumoni was available in Phoenix stores when the Italian population was higher than it is today. But until recently, American tourists spent their vacations in western Italy; Naples, Rome, Tuscany. Only the adventurous journey to the Italian east coat.

If decent spumoni is available at your local grocer, ice cream shop or Italian restaurant, remember National Spumoni Day on August 21st and enjoy a small dish of this Italian specialty. If not, enjoy a serving of tiramisu and experience Italian nirvana.