Those where the good ole days. A time when life was simpler and you didn’t have as many choices to make. A time before the age of technology. A time rooted in the much simpler industrial revolution.

Those days are long gone. It first started a few decades go by the small, artisan potato chip makers who turned out small batches of kettle chips. Super crisp potato chips made in small batches instead of mass produced. New flavors began to emerge like vinegar and sour cream and dill. It was a niche market until the large mutinationals saw visions of great wealth to be made by giving Americans and the world a variety of flavored potato chips. There was no limit to what could be achieved with the right blend of artificial colors and flavors. But cappuccino? Cappuccino is a beverage enjoyed for breakfast. At least in Italy. Will this potato chip contain caffeine?

I just shook my head when I saw Lay’s foray into new potato chip flavors. And the ever diet conscious American people can vote on which they would like to see come to market if only for a short period of time. The choices:

Wow, that a selection. Take something healthy like mango salsa and turn it into a potato chip flavor. I’m sure there is a huge market for wasabi ginger. As for me and my house, I’ll stick with the tried and true original. Just call me old fashion. 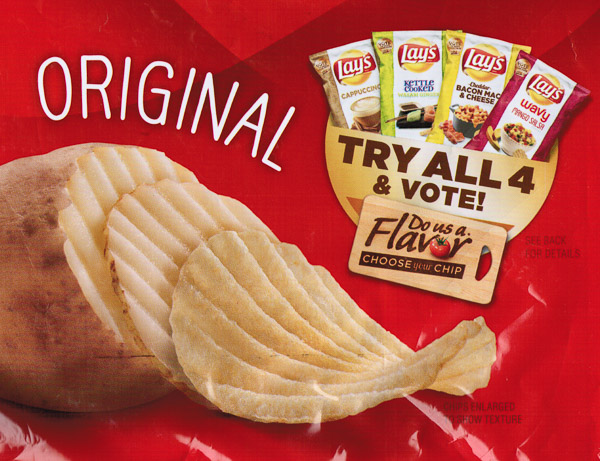