One of the features of Italian Med Diet is providing accurate nutrition information for each recipe. To do this each ingredient must be weighed or measured. Measuring is easy using standardized measuring cups and spoons. Weighing can be tricky dependent on the accuracy of the scale used.

Where’s The Rest of My Chicken?

Earlier this year I bought a package of boneless, skinless chicken breasts from a Glendale, AZ Fry’s Foods which heavily advertises their “Famous Low Prices” and is in heated competition with Wal-Mart Super centers sprouting like mushrooms across the metro Phoenix area thanks to Arizona’s Right To Work laws encouraging hundreds of thousands of low paying, dead end jobs with no benefits. But I’m digressing.

I bought a package of Kroger Heritage Farm boneless chicken breasts and weighted the contents before repackaging and freezing for later use. When I added up the weights, my total was more than one-half pound less than the net weight on the package label used to calculate the selling price. That concerned me. If my scale was that inaccurate, all my nutrition calculations were also inaccurate meaning portions had more calories, fat and sodium.

The trademark on the package is “Where Value Grows.” Value for Kroger which owns Fry’s not for the consumer. It turned out my scale was accurate and Fry’s was short weighing Heritage Farm chicken breasts.

Where did the half pound go? Then I noticed the pad under the chicken, used to absorb moisture, was considerably thicker and heavier than usual. In fact, it was incredibly heavy. So I weighed it. The pad weighed over 8 oz. (225 g). At the regular selling price of $2.99 per pound, consumers were paying $1.50 or more for padding which not allowed by Arizona Weights and Measures law. The net weight must be the product weight (including juices) excluding packaging. 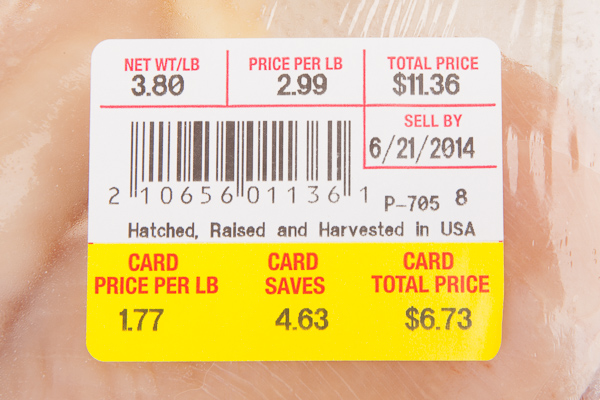 Arizona Department of Weights and Measures has a consumer compliant system. Before filing a complaint, I decided to check the accuracy of my scale. Using a set of precision weights, I found my scale was accurate to within +/- 2 grams.

I filed a complaint and waited for the results. It’s been two months and with a busy schedule I didn’t have time to check if the compliant was closed. This morning I checked the compliant status. An inspector was assigned and performed the inspection within 2 days of filing my complaint.

The inspector validated my complaint. The weight of the pad ranging between 0.5 and 0.8 pounds (read report below) was included in the net weight. The store was ordered to pull the product off the shelf and is being fined for violating State law.

Fry’s Foods is a major supermarket in Arizona spending millions of dollars annually on print, radio, and televisions advertising about the bargains awaiting shoppers. You’d expect accurate pricing especially for their corporate brands. Consumers shouldn’t have to weigh products to verify if they got what they paid for. I discovered the violation because I must weight all ingredients to provide accurate nutrition information for this site and my cookbooks. If it wasn’t for that, I, along with thousands of other consumers, would have overlooked the weight error.

When you shop at a butcher store, the butcher weights the product to calculate the price and then wraps it. The cost of dying business is reflected in the price, but they don’t toss a sheet of butcher paper on the scale charging you for the weight of the paper. The same applies to the supermarket pre-packaged meat counter. When you pay for 2 pounds of meat, fish or poultry you expect to get 2 pounds of meat, fish or poultry. Not 1.7 pounds and 0.3 pounds of packaging.

Like the Romans said, caveat emptor, let the buyer beware. It was true then and, sadly, it is still true today.